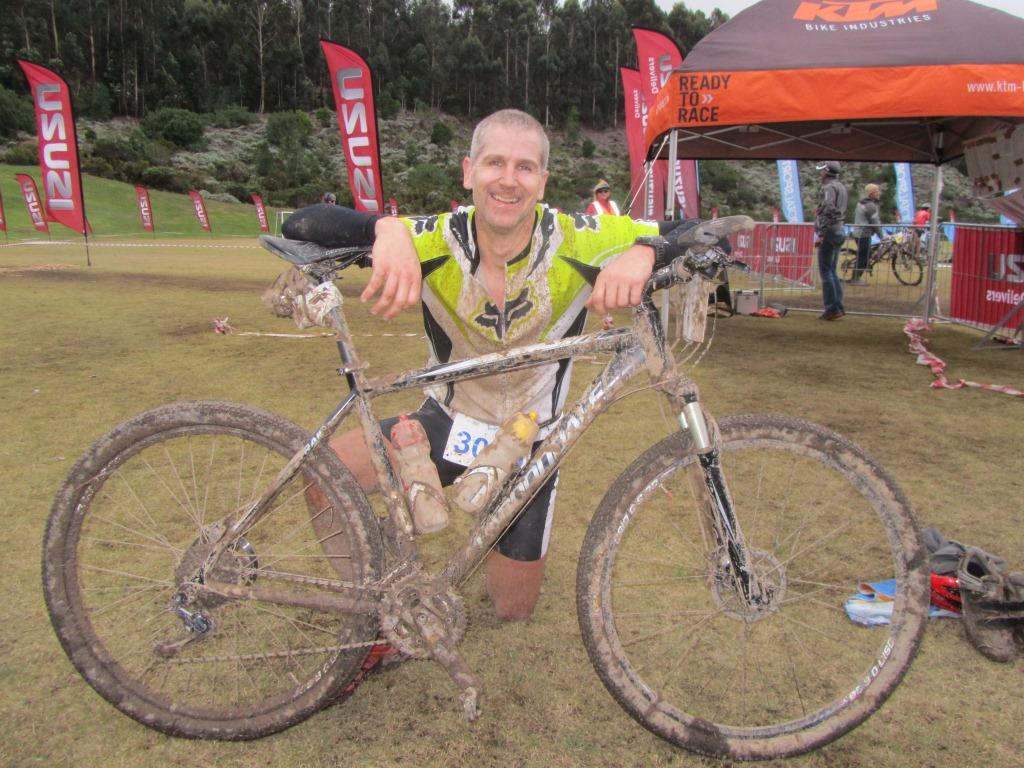 I would find it very hard to recommend this race to anyone who is not pretty serious about their mountain biking. I have mentioned in the past that I feel races such as XTERRA Grabouw favor mountain bikers heavily; this race favored a specific type of mountain biker. It’s interesting to read race reports of other  warriors on the day: some loved the mud, others hated it.

I arrived knowing that I was going to be super-strong in the running sections and hanging on for the MTB leg. But I could have had no idea of just how tough the cycle course would be. It was cold and breezy at the venue, and rumours of a wet course were confirmed by XTERRA Lite warriors returning from the field of battle. The transition area is in the centre of a large sports field surrounded by grassy banks, a natural colosseum waiting for the gladiators to enter and do battle. Entry to transition was delayed as the last of the XTERRA Lite competitors cleared the course and transition area, and in fact, the last brave souls were treated to quite a daunting finish-line as the XTERRA Full participants were under starters orders when they arrived and parted to allow them to finish down through a tunnel of cheering, race-ready athletes!

I lined up at the front with the racing snakes; I normally fuss about at the back of the field so it was pretty daunting to be lining up shoulder to shoulder with the champions of the XTERRA and Big 5 Challenge. I went out super-hard on the first 3km run wanting to get clear of any single-track mayhem. I used Bryan Allott as my pacer and enjoyed a fast, well-paced run.

The MTB started out slightly wet but reasonable fast, but as we got deeper into the forest the trail just got muddier and muddier. As my speeds dropped my tires (and bike in general) lost the ability to shed mud and I found myself literally bogged down. Whilst the mountain bikers I spoke to after the race seemed to think this was great fun, I did not enjoy it at all.

As my MTB had been a bit of a non-event, I still had decent legs for the final 7km trail run. Both trail runs included runnable hills and sweeping single track similar to that of the Salomon Featherbed Trail Run and very different to the rocky Table Mountain fare many of us are accustomed to.

There were 330 finishers, 75 of which were ladies. Here are some numbers from the official results: