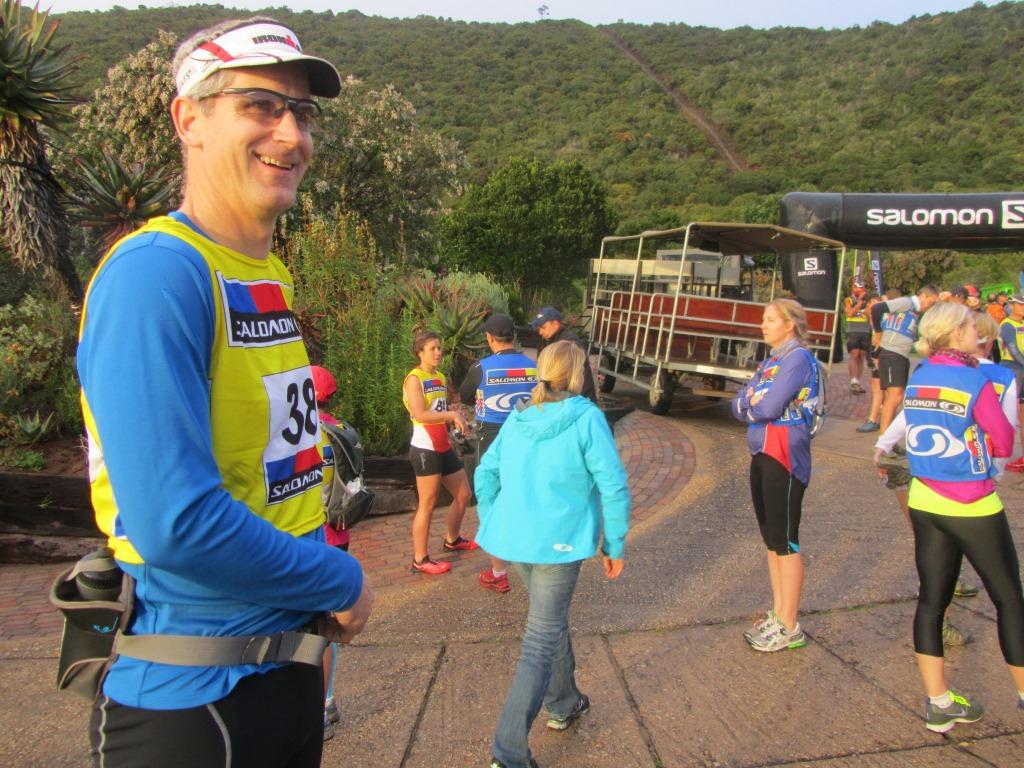 Something magical happened for me in Knysna: I had lost interest in running the same old rocky mountain trails in Cape Town after the 2011 Otter Trail Run; after a few years of loving running wild, the sport seemed to have lost its appeal.

But after the epic Greyton Classic Trail Run route last month I realised that I was just sick of the same rocky, mountainous trails being dished up ad nauseam at nauseating prices. Then a run through the Harkerville Forest at the Hi-Tec Forest Family Hike on the Monday took me to a happy place (running with my amazing girlfriend helped ;-)), and then wham! my trail running mojo was back — and guess what: it brought a pair of hill-climbing legs along with it!

People speak of value for money. Look at these photos below — and this is before you have even started running! Runners got to enjoy a chilly but inspiring ferry trip from Cruise Café in Waterfront Drive across the lagoon to the Featherbed Private Nature Reserve which is on the western head.

So I have climbing legs at last! Or at least temporarily. The race started with a loop up the road and back down to and through the Featherbed Restaurant to spread the field out a bit before hitting the single-track. My strategy was to take it easy on the climb, saving my legs for the last flat kilometers of the course. As usual I was arbing around at the lineup and was nowhere near the front of the pack, so when the race started I had to hustle my way through loads of runners. I got myself closer to the pacier end of things just in time, and settled in on the single track just above the lagoon waterline.

The trail then climbs up some pretty even rock stairs. Walking was the order of the day and I sat on the heels of some fellow yellow bibbers (Big 5 Challenge competitors wore yellow Salomon bibs). I felt far stronger than I had expected, and when it got to the runnable sections between the sets of stairs I was able to recover quickly and maintain the pace.

Man did I climb like I have never climbed before! Sorry to the guys and gals around me who may have been irritated by my ongoing chatter but boy was I loving climbing the iconic western Knysna Head on Tuesday morning!

Once the main climbing was over I found that the people around me meant business and the pace was quick as it weaved along soft runnable single track rolling slowly up the upper sections of the head to the massive telecoms tower. Long not overly steep downhills meant the pace just got faster and I kept saying to myself you are going way too fast can you keep this up without blowing…

The last 3 kilometers take you across the old railway causeway. It’s interesting running, mostly along a narrow footpath strewn with stones from the railway line, interspersed with sections of metal grids across the actual bridge sections over the lagoon.

The finish followed the railway line all the way into the Knysna Waterfront before turning back on itself and chasing the footpath around the Laguna Holiday Apartments on the water’s edge to end at Cruise Café.

And if that’s not enough, watch this great vid on YouTube.com:

6 Reasons to enter the Matroosberg Challenge